Close to Care, Comfort, and Caden

When our son Caden was born, he slept a LOT.He had to be woken for every meal; an extreme departure from his brother, who was always hungry and never slept. We thought, “Hey! We lucked out this time and got a kid that actually sleeps!”

However, at nine days old, he started getting extremely hard to wake for meals. We brought him to his pediatrician, who immediately called 911.

Our son had gone into cardiogenic shock due to an undiagnosed heart condition. His organs were quickly shutting down and he needed to be medevac’d to Children’s National Medical Center in Washington, D.C. for heart surgery.

At twelve days old, Caden underwent heart surgery to correct his heart defect. The surgery went smoothly and was successful.  We thought we’d be heading home after a few days of healing.

A meeting with Caden’s medical team was scheduled for bright and early the next morning.  So while Caden was under the watchful eye of his own personal Cardiac Intensive Care Unit (CICU) nurse, we went to our room at Ronald McDonald House to catch a couple hours of much-needed sleep.

At 3 AM, the phone next to our bed rang – it was the CICU telling us that we needed to get back to the hospital immediately. Caden’s lung had burst and they were struggling to keep him oxygenated.

Because of our room at Ronald McDonald House, we were able to be by our baby’s side within ten minutes. It would have taken upwards of an hour to get there from our house.

What followed was six weeks of surgeries, therapies, and procedures that ultimately saved Caden’s life a second time.

We live over 40 miles away from where Caden was treated. Having a “home base” at Ronald McDonald House was a complete game changer. After spending 16 hours a day at the hospital, I was able to cook a quick meal, do laundry, and take advantage of the full fridge, all while knowing that I could be back in Caden’s room in minutes, if needed. Our first week there, I practically lived off of the chocolate milk they keep stocked.

Sometimes, little things – like chocolate milk – bring the most comfort.

During Caden’s six-week hospitalization, his dad stayed at home with our older son, while I stayed in D.C. with Caden. Ronald McDonald House provided a place where we could be together when they visited.  The grassy field and outdoor playground offered a sense of normalcy for our energetic toddler.  A place where he could run around and explore – not something he could do in the hospital. 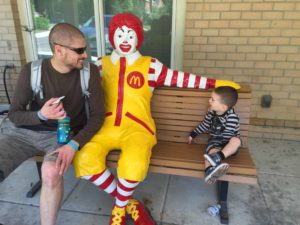 Ronald McDonald House helped us take care of ourselves on a basic level so we could show up for Caden when he needed us most. Getting a few hours of solid sleep and grabbing a meal made it possible for us to get through each day.  We were able to stay sharp for difficult conversations and make hard decisions about Caden’s treatment. And seeing all the ways that others give to support families like ours gave me a sense of connection – of family. He was able to be weaned off of the feeding tube he required as an infant, and his cardiac checkups have indicated that his heart is looking great. His lungs continue to be our biggest concern, as he’s extremely prone to lung infections, but we’re confident in his medical team. Overall, Caden is a generally healthy kid who loves preschool, climbing, donuts, and everything Paw Patrol. When he and his brother are a little older, I look forward to bringing them to the House to make meals for the families staying there.

We are now, and forever, part of the RMHCDC family.